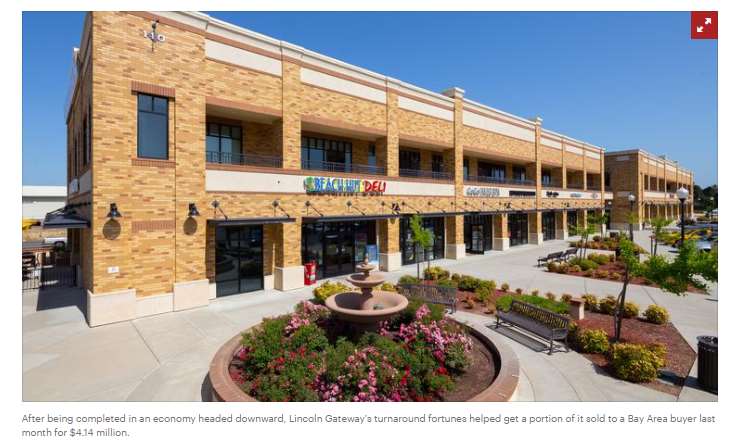 Those days are gone, with a two-story, 18,430 square foot component of the development sold recently as a leased asset for $14.4 million.

Robb Osborne, a principal with the The Osborne Group at TRI Commercial, said the property went through a series of owners as its fortunes improved.

Panattoni Development originally built the entire Lincoln Gateway development of 74,586 square feet at 110 Gateway Drive more than a decade ago, just as demand for office and retail space began to decline.

Vanir Group of Cos. bought it from Panattoni nearly empty, Osborne said, and helped boost leasing to about 50 percent. After Fit Family Development acquired it in mid-2017 for $3.27 million, the company embarked on a $150,000 capital improvement plan and worked with Osborne’s group to find office tenants for the second floor.

“It was difficult for a while,” he said. “The owner had to reset the basis to be competitive, but for a while the market wasn’t there.”

In addition to the two story building that sold last month, Lincoln Gateway included as series of single-story office building on the east side of the property that sold separately to tenants, mostly medical offices, in recent years.

Osborne said tenants often consider Lincoln as a secondary market in south Placer County to the bigger cities of Roseville and Rocklin. Three of the office tenants that filled the two-story building are tied to the homebuilding industry, a sector that’s only returned to growth mode in recent years, he said.

The two-story building is now 100 percent leased. Broadway Property Management, with an address in the Bay Area, is listed in property records as the buyer. Escrow closed in December.

As opposed to a property with potential value in the last sale, Osborne said, Lincoln Gateway is now considered a leased asset. That makes its future trajectory better, he said, adding that Beach Hut Deli, which relocated from a center nearby to Lincoln Gateway, saw revenue double after the move because of better visibility.

The Osborne Group worked on both the sale and leasing for the property.